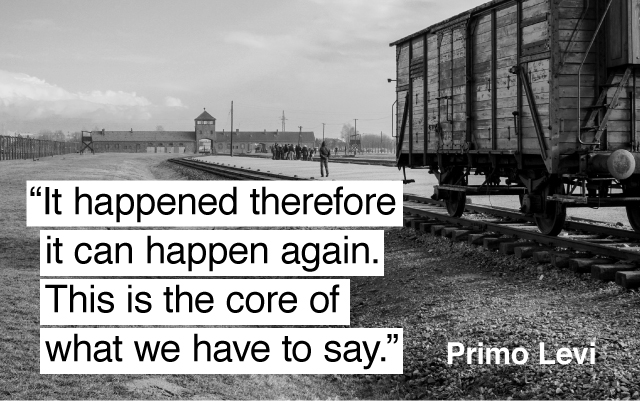 In an era where ‘fake news’ is often used to pit certain parts of society against others, it’s so important for our children to learn to spot the signs that someone is working to create an ‘us vs them’ feeling.

On Holocaust Memorial Day, we remember how horrific the effects of an ‘us vs them’ attitude can be, and how dangerous fake news can be.

The theme this year is #StandTogether - looking at how genocidal regimes have deliberately fractured societies and how individuals standing together against that can help to stop oppression.

What is fake news?

Essentially, fake news is disinformation that is portrayed as real, factual news. It is usually spread either by traditional news media (i.e. print and broadcast media), or via social media – and often both.

This is not a new phenomenon and has, in truth, existed as long as news media has existed. As long as truthful, factual news has been able to be relayed to people, so has fake news.

The term has, in recent times, returned to the fore due to its use by politicians to cast doubt on any negative reporting of their actions.

But this too has historical precedent - Adolf Hitler understood the power of fake news perpetuated by the Nazis but he also used the term itself (Lügenpresse in German) to discredit reporters who published anything negative about the Nazis.

Why is it so dangerous?

One of the biggest dangers of fake news is that it can encourage negative thoughts and opinions of other people or groups of people, creating or encouraging an ‘us vs them’ way of thinking.

This is dangerous because once people begin to think that way about others, it dehumanises that other group, making it easier to deny them civil liberties, or even commit crimes against them in the mistaken belief that they are justified to do so.

How can we help students to understand how important it is not to fall into an ‘us vs them’ way of thinking?

Perhaps the best way to educate students against falling into this way of thinking is to show them the horrors that have happened when people adopted an ‘us vs them’ attitude.

For example, loyal Nazis clearly had a very strong sense of ‘us vs them’ when it came to those who they considered to be non-Aryan.

But they also used propaganda and ‘fake news’ to persuade the population of Nazi Germany and Nazi-occupied Europe to develop similar views, allowing them to carry out the Holocaust and even convince ‘normal’ people to be complicit in these crimes.

Taking your students to somewhere like Auschwitz will help to bring the Holocaust to life for them.

And this will leave them with a permanent reminder in the back of their minds as to the dangers of allowing fake news and propaganda to turn them against another person or group of people.

Further discussion back in the classroom encouraging them to always question the news and information they are being fed will help them to develop their critical thinking and leave them less susceptible to fake news.

Interested in a school trip focusing on the Nazis and the Holocaust?

Yes, send me a tailor-made quote