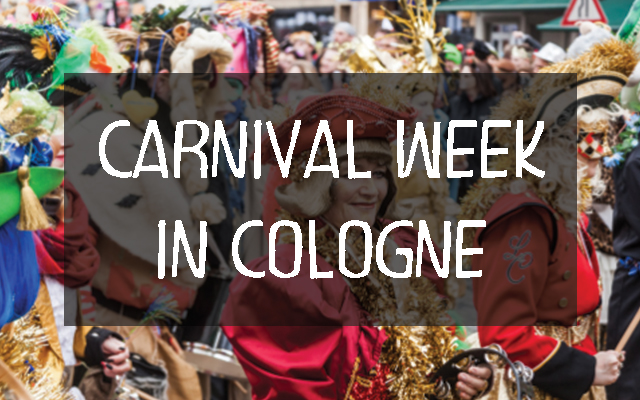 Thursday 20th February marks the start of carnival week in Cologne and, if you’ve not been before, it’s an experience not to be missed!

Why is Cologne Carnival famous?

Carnival is celebrated around the world in the run-up to Lent. It’s often a raucous affair, with parades, music and dancing. There are many famous carnivals around the world, including those in Rio de Janeiro and Venice, but the one in Cologne is particularly special.

Carnival, and its Roman and pagan predecessors, have been celebrated in the city for nearly 2,000 year, so it’s a really well-established event that is a fantastic showcase for the local culture.

This week-long festival is actually the culmination of what’s known in Germany as the ‘Fifth Season’. Starting in November, this fifth season traditionally ran from harvest celebrations up to the beginning of Lent and is particular to German-speaking Europe and the Netherlands.

What can I expect to see?

The ‘crazy days’ open with the Women’s Carnival Day (Weiberfastnacht). You’ll see women in fancy dress heading to the office, or to the Alter Market, where the Carnival is officially opened by the triumvirate (Dreigestirn) – three men granted the titles of the maiden (Jungfrau), the prince (Prinz) and the peasant (Bauer). In many ways, this trio actually tell the story of the city, as well as being colourful personifications of the carnival spirit.

The prince, referred to as Sein Tollität (His Madness), is the highest representative of the carnival and leads the main parades throughout the week, except on Shrove Tuesday, when his float brings up the rear in the large parade on that day, marking the end of the celebrations.

The maiden is usually portrayed by a man, except from 1936-43 when the Nazis ordered the character to be portrayed by a real woman. She is referred to as Ihre Lieblichkeit (Her Loveliness) and beards and moustaches are forbidden. She represents Mother Colonia and wears a Roman dress as a reminder of Cologne-born Agrippina, wife of Emperor Claudius.

The peasant, usually referred to as Seine Deftigkeit (His Heftyness) represents the old imperial city of Cologne and the power of the farmers’ guild.

‘Weiberfastnacht ’ always takes place on the Thursday before Ash Wednesday, known as ‘Fat Thursday’ and parties and balls go on late in to the night.

On the Friday, most people in the city will spend the day recovering from the revels of Weiberfastnacht, ready for more balls and parties in the evening.

Saturday sees the famous Geisterzug (ghost parade). Everyone, whether performers in the parade or spectators, dress up in ghostly fancy dress, almost like Halloween!

On Sunday, school and club groups parade through the city centre from around 11am.

And the climax of Cologne’s carnival is the Rosenmontag or Rose Monday. This is a day full of colour, with almost everyone in fancy dress. School children are given the day off and most of the city’s population jostle for the best positions along the 6.5km parade route.

On Shrove Tuesday, parades take place in the city’s suburbs and the Nubbel is burned. This strawman embodies all the sins committed during the hedonistic carnival celebrations and, by burning him, those sins are also burned away.

Finally, on Ash Wednesday, when all the raucous events of the carnival are over, locals traditionally enjoy a fish dinner, either in their homes or in local restaurants and pubs.

What are the highlights?

Without a doubt, the highlight of Cologne’s carnival week is its climax – Rosenmontag. Every year, around one million people attend the Rosenmontag festivities in Cologne.

This is a day of fantastic colour, boisterous celebrations and plenty of humour and goodwill.

The spectacular parade lasts around 3 hours and features more than 10,000 participants! You’ll need to get there early to get a good spot, not only to see the spectacular floats, but also to catch some of the goodies that will be flung from them.

Ready to start planning your next school trip to Cologne?

Please don’t hesitate to contact us for further information or to request a tailor-made quote.